Drop by your favourite Honda car showroom in Chennai to choose and select your dream Honda car. We offer world class facilities and state-of-the-art services for your Honda Car. We offer pick and drop facilities at your doorsteps of your car as per your convenience.

The company will be committed to strive towards ensuring enhancing customer satisfaction in all spheres of its activities viz Sales, Service Spares.The Grandiose March towards the Golden Jubilee Year of business operations of The Khivraj Group.In 1960-61, Our Visionary Beginning took off in the year 1960-61, when we partnered the pioneers of automobile industry then – Hindustan Motors Escorts Ltd. 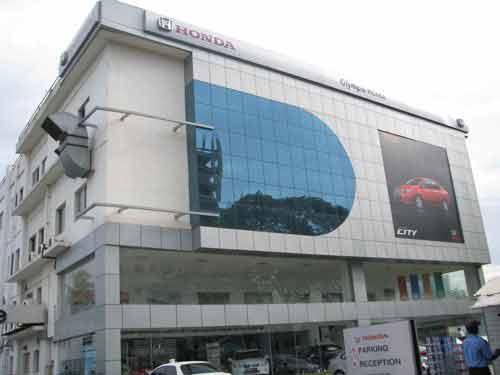 In 1996-97, With a view to leave a big footprint in the passing by millennium, we partnered with the next big thing in the automobile industry viz. Maruti Suzuki; in the status of Authorized Dealership in the year 1996. Thus becoming one of the most admired automobile brand in the city.

In 1990, The Group honored with ISO Certification in the year 1999. Exactly falling in sync with our company’s mission statement and assuring us of being a company ready for a new millennium.

In 2000, Thus leaving a big footprint in the millennium by-gone, we entered the brand new millennium with great energy-vision-plan-and a growth hungry attitude.

In 2001, Come 2001 and we forayed in to a totally new and growth promising Real Estate Industry under the company banner of “Khivraj Estates Ltd”.

In 2009, Our latest venture to knock the doors of the premium high end car industry came in the year 2009 when we forayed in to the dealership of HONDA CARS under the Brand name of “Olympia Honda” at Ambattur in Chennai. In a very short span of time it has turned a lot of heads by earning laurels and appreciations from the group as well as from the principals.